Naming Your Cat – Here’s where to get ideas… 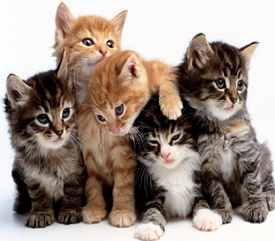 Some thought should definitely be given to naming your cat. Sorry, T.S. Eliot, the naming of cats is not at all a delicate a matter.

Fortunately, naming your cat with a good name can be fun and there are endless possibilities for ideas.

One very popular way for finding a good name is to look up the names of stars, galaxies or constellations. You don’t have to stick with just the major ones. Look up some of the minor constellations and stars as well. You could find just the perfect name in a constellation you had previously never heard of. You too may find you have a Aquila or Lyra fits quite nicely. Here’s a list to help when naming your cat >>

Another popular means of naming cats is using human names. Some people name their cats after movie stars or characters in a favorite film or book.

Another good way to name a cat is by using something in their appearance to name them. Many calico colored cats have been simply named Calico. Spotted cats of any color frequently have the name of Patch. One cat was named Shadow because her black and tan tiger stripes seemed to melt into the late afternoon shadows the first time her new owner saw her. A gray kitten was quite suitably named Ash.

Sometimes it is something the cat did that suggested their name. One kitten had a habit of scaring himself silly. When he and his siblings first learned to climb trees, he became over excited and rushed up higher than he was brave enough to climb down from. The poor little gay clung to a branch crying at the top of his lungs while the adult cats rushed around trying figure out a way to get him down. It only required a stool to retrieve the little guy, but he was sure he was stuck halfway to the moon. Another time he managed to get his head stuck between the slats on an old corn crib. He was safely rescued after considerable effort. Due to this undeniable talent for scaring himself, he was named Spook.

Sometimes it is the cats’ personality that suggests a name. A bold little explorer who was the first kitten in his litter to explore the world outside their nest was named Boone. A handsome brown kitten was so very fastidious in everything he did (one never puts ones’ paws in the food dish, that’s dirty!) that he was eventually named Thomas.

Naming your cat can be a pleasant and entertaining task. It’s often the very first thing a person does when he or she picks out a new companion. Take a little time to select just the right name for your new friend. A good name will set your new relationship off on just the right foot.