Manchester Terrier – A Lot of Personality in a Small Package! 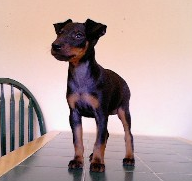 The Manchester Terrier is one of those dogs that puts a lot of personality into a fairly small package. A remarkably attractive pet with a convenient smooth and short-haired coat, this terrier is one of those breeds with an interesting background stemming from the early, “working dog” days.

These terriers derive from the old black and tan terrier breed in England. Back in those days, terriers weren’t known for their beauty — to put it kindly — but they were tireless, muscular, and keen. In fact, they were widely known as the best rat killers around, regardless of the terrain. Their skill and enthusiasm easily overcame any objections to their physical appearance, and the breed grew very popular.

At some point, a black and tan fancier crossed one of his terriers with a whippet, a far more graceful-looking dog resembling a Greyhound. The result was a beautiful dog retaining all the terrier prowess, and this new variety made quite a splash. Even so, the new dogs were also called Black and Tans until the Manchester Terrier Club finally formed in the 1920s, changing the breed name to Manchester Terrier.

Despite all they have to offer, including a wonderful suitability for today’s urban environments, the Manchester terrier isn’t nearly as well known as it ought to be. In fact, although it enjoyed a surge in popularity sometime back, the breed is practically obscure these days, with only a few dedicated breeders sustaining it.

Yet despite our neglect, the Manchester terrier is a gorgeous breed in its own right that has contributed its beauty and brains to much more well-known breeds, like the Doberman Pinscher. Even better for urbanites, it comes in two varieties — standard, which ranges from 12-22 pounds, and the toy breed, which is typically about 10.

It’s surprisingly we don’t see more of them around. Not only is the Manchester terrier a refined, alert dog boasting a rich mahogany color and an attractive, Doberman-style tan patch over each eye, he’s also playful — he’ll sport for hours on end with the kids — and happily long-lived. Like all terriers, however, this one is a natural digger, and will need some kind of outlet for his energy and keen mind.

This terrier is a much better choice for a boisterous family than the single working person who must crate his dog for most of the day. Just make sure that your children are old enough to show your terrier some respect for his “person” and not manhandle him. Finally, brainy dogs like terriers need to be taught they don’t rule the roost. If you don’t have a background in obedience training, you’ll want to take him in for classes.