Boston Terriers will charm you…

Is a Boston Terrier Right for You? Do you want a dog that is as all American as apple pie? If so, you may want to consider the Boston Terrier, which is one of the few breeds developed in the USA.

These comical charmers originated in Boston in the 1800’s. Boston Terriers were the first American breed accepted by the American Kennel Club, which classified it as part of the Non-Sporting Group. These dogs weigh 15 to 25 pounds and stand 15 to 17 inches tall. 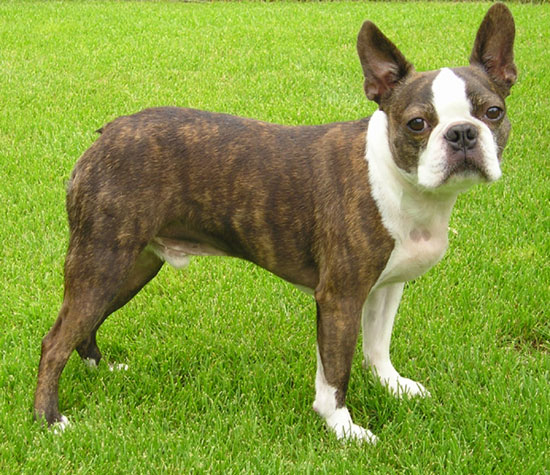 Boston Terriers are highly intelligent dogs, have a square skull and a short muzzle. Their floppy jaws give them a slightly clownish appearance and their short tails can be straight or corkscrewed. The Boston Terrier’s coat can be brindle, seal, or black, with white markings.

Ideal Boston Terriers have symmetrical markings, with a blaze of white between the eyes and a white chest and front legs. Boston Terriers are kind, friendly dogs and rarely meet a person it doesn’t like. They love family gatherings, which mean they get tons of attention and some tasty treats.

This breed absolutely adores children, although puppies may be too rough and rowdy for toddlers unless they are closely supervised.

Boston Terriers are known for its high energy and slightly boisterous behavior. Since Boston Terriers are such intelligent dogs, they enjoy learning. Puppy classes are important for this breed, since without something to occupy, your Boston’s energy will get him into a ton of mischief.

Once you see how quickly Boston Terriers master basic obedience, you may want to start competing in obedience and agility trials with him. Most of these dogs love the chance to put on a performance for a crowd and genuinely enjoy competing in these trials.

Despite its high energy, Boston Terriers can thrive in an apartment or small house. However, if you do not have a fenced yard, you will need to take your dog for a long walk or a romp in the park each day. If you cut your dog’s exercise routine short, don’t be surprised if he is bouncing off the walls the next day, especially if he is a young dog.

For many years, Boston Terriers, as a breed, were in serious danger of being destroyed by irresponsible breeders, who did not care breeding dogs with genetic problems. With hard work and careful breeding, fanciers have brought this breed back from the brink. However, the breed still suffers from a few common health problems.

These dogs are prone to cataracts, deafness, hypothyroidism, heart murmers, and bad knees. In addition, many Bostons have a weakened immune system, especially when they are under six months of age. This can lead to a serious case of Demodectic mange, which is a non-contagious condition that results in bald spots. A bad case of Demodectic mange can leave your dog completely bald and covered in sores. Most dogs grow out of the condition with treatment, but some never recover and have to be put down after developing massive skin infections.

Boston Terriers are chow hounds, but still do not eat nearly as much as bigger breeds. While they are young and active, these dogs burn through all of those calories fast, but you will need to keep a close eye on your dog’s weight as he ages. If he starts to bulk up around his chest, ask your veterinarian about a diet for overweight dogs. Unless your Boston Terrier develops Demodectic mange, you will not need to groom him more than once a week. If he does have mange, you will need to give him a daily bath and you will need to take him to the veterinarian frequently for additional treatment.

Boston Terriers can be a bit overwhelming for some people, but if you don’t mind a little noise and rowdy behavior, why not let this dog charm you with his loving, affectionate nature.